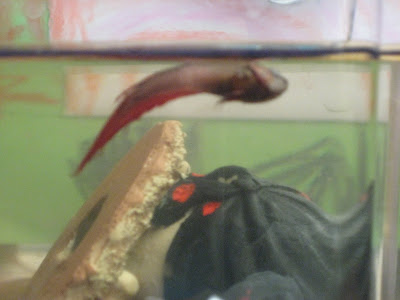 Wednesday night, my little one faced the pain of grief. His little fish, bought with his own money, died. It's a fish, right? We all know this happens to fish, sometimes sooner, sometimes later.
But to a five year old, this was a great tragedy. Red Goldie Fin was in a bowl next to his bed. He was a companion at naps and at night. And this week my son had to attempt to understand the fact that musicians and poets and philosophers all attempt to grasp- death. Burying his head in his pillow, he wailed. It broke our hearts just to hear him.
I was taken back to the other deaths I have been near. And the sound is the same. The great keen that comes from the guts of someone who stands on one side while one they love has crossed over. That pain, that raw agony of the heart.
I so much wanted to take away my little boy's pain, to quench the burn of mourning. But it couldn't, and even if I could, should I? For the short-lived grief he experienced was a primer for the losses he will inevitably face in life.
We sing of Christ "conquering death by death" and see icons of the harrowing of Hell. The one who is in us and around us has looked at death square in the face. He has wailed, mourned and keened with us. And He has gone through death and brought life out on the other side.

** The picture above was taken at my 5 year olds insistence. He has a printed copy of this on his wallet to carry around with him.
Posted by monica at 11:55 AM

welcome to my garden.
don't mind the weeds.
good things are still growing despite them.

use the internet to get books!